The road to an amazing marathon result (Seville 2020)

Each day that passes after the successful marathon in Seville makes the recollection more romanticized. I outdid my personal record by almost four minutes, achieving the second-best time in Estonian history – 2:10:02. With this result I got the opportunity to represent Estonia in Tokyo Olympics 2020.

Immediately after the race I told one of the Estonian news channels that it had been a miracle. Two weeks later I still carry this belief. 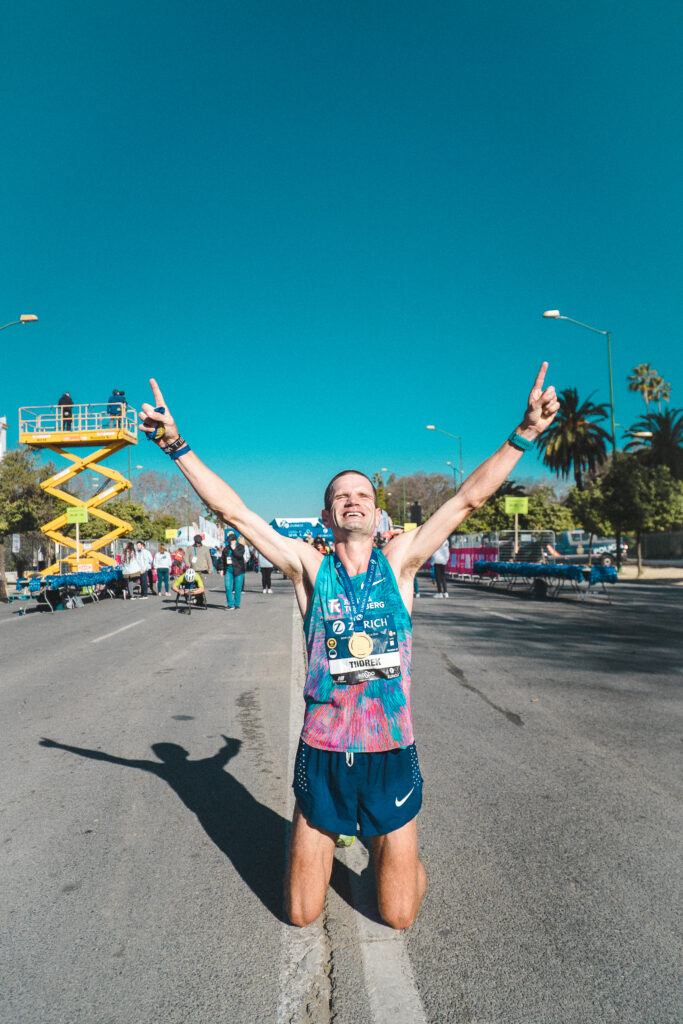 Thank God for this miracle! Photo by López Gil

The decision to compete in Seville was settled virtually 24 hours after the Doha World Athletics Championships in October. By coincidence I met an organizer for the Seville marathon in Qatar, who told me about the startlists and the goals for the elite runners in Seville. They were expecting many attempts in meeting the Olympic qualifying standards in the Spanish championships. The matter became more personal a few weeks later when names of the contestants who wished to participate in the run begun emerging one by one.

By the end of October, I had bought plane tickets to Kenya and Portugal, essentially planning my family’s itinerary five months ahead. In the beginning of November, I gradually started laying the foundation. Starting a new training cycle is always a challenge. It can make you feel as if you have never run before – heartrate, muscle tension, weight and running speed are all haywire. In that moment, any additional sources of motivation in the training routine are helpful. One incentive that I used was training together with hurdle racer Rasmus Mägi. November is the only time of the year where two runners of such different fields could train together. Figuratively speaking, we used each other to kick-start our ‘tarnished engines’. 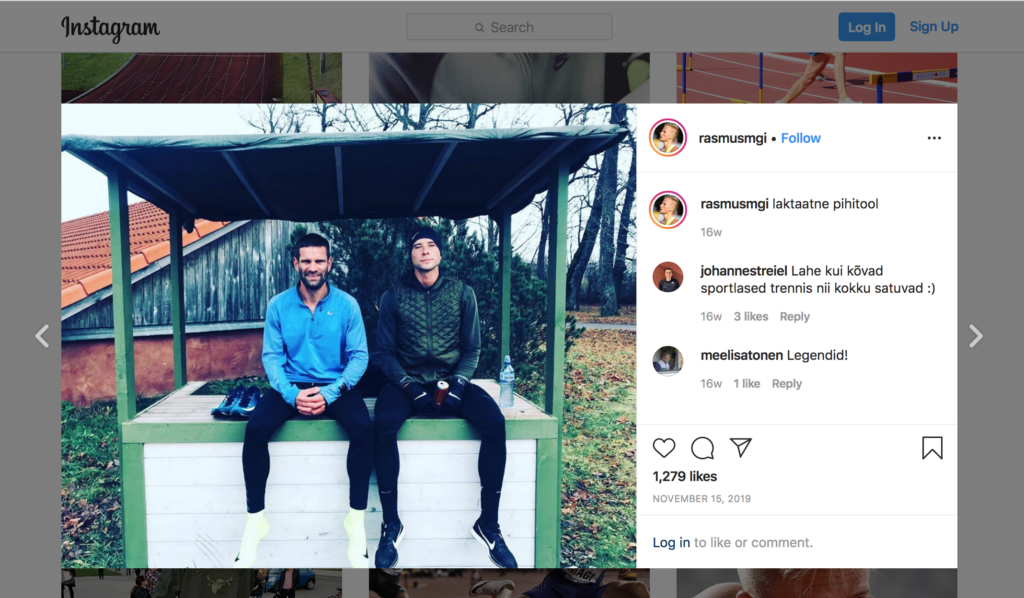 Training together with Rasmus in November. Photo by Taivo Mägi

On the last day of November, me and my four-year-old son Ruuben sat on a plain heading to Kenya. We went to Nyahururu – the place I have used for training since 2012. We were welcomed by my mother Riina, father Margus, and steeplechaser Kaur Kivistik together with his family. We lived in the same house we had been staying in for the last four years. There have been 75 different people living in that house in those years. We call this house ‘The Estonian House in Kenya’. 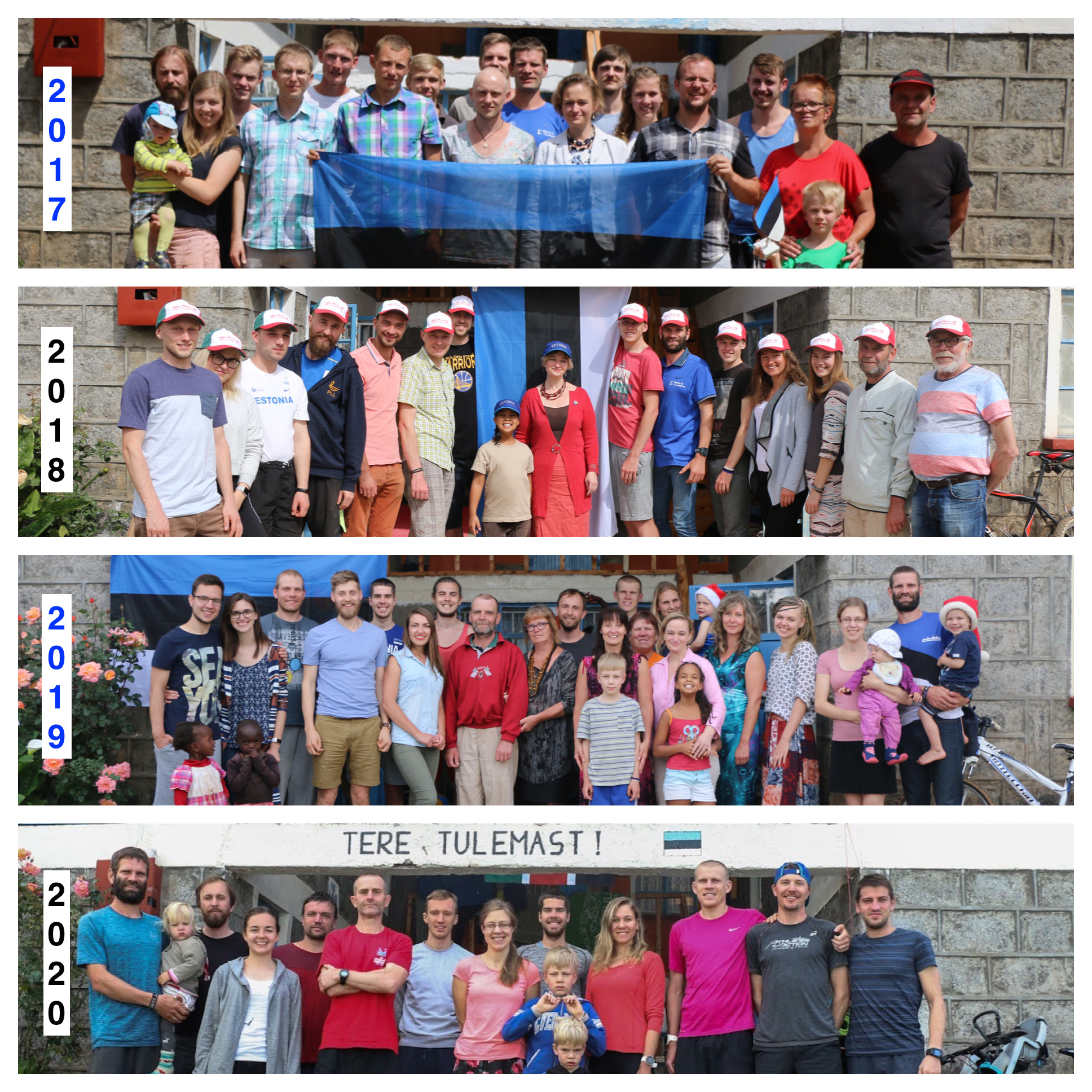 Four seasons in ‘The Estonian House in Kenya’.

Before Christmas, the other half of my family (Maili, Jakob and Lili) joined us, and in the beginning of January the house saw an even larger number of visitors. All this was accompanied by demanding training sessions with Mukunga and many other supporters. Some significant changes that I implemented were extending my longer runs and increasing the distance of longer stretches. For instance, in the 69-day training camp I ran three runs that spanned more than three hours and increased the distance of threshold trainings up to 32 km (per one training session with the warm up and the recovery). With the help of my sponsor Aivar Tuulberg, physiotherapist Peeter Nigoli was added to my team. Furthermore, we had Nick Schuetze, an American sports chaplain and assistant trainer, join our training camp. 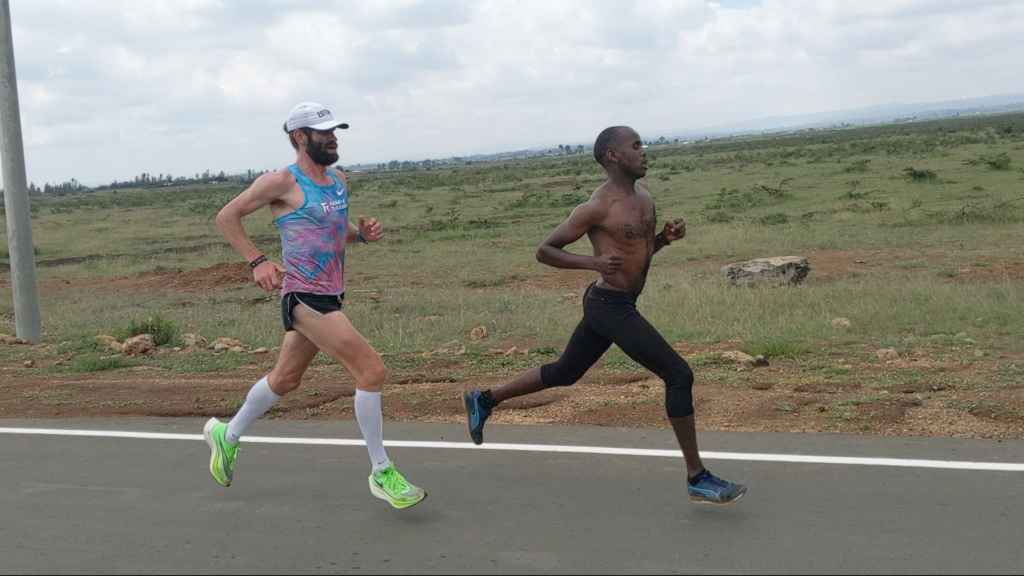 Training together with Mukunga on the Rumurut-Sipil highway. The brand-new asphalt and a slightly lower altitude (1900m) made running enjoyable.

16 days before the marathon in Seville I flew from Kenya to Portugal, once again with my son Ruuben. We were joined by Maili and our daughter Lili, who in the meantime had gone back to Estonia. We settled down in Vila Real de Santo Antonio near the border of Spain. It is a well-known location among athletes and located only a 90-minute drive away from Seville. The last stretch of training took place there. 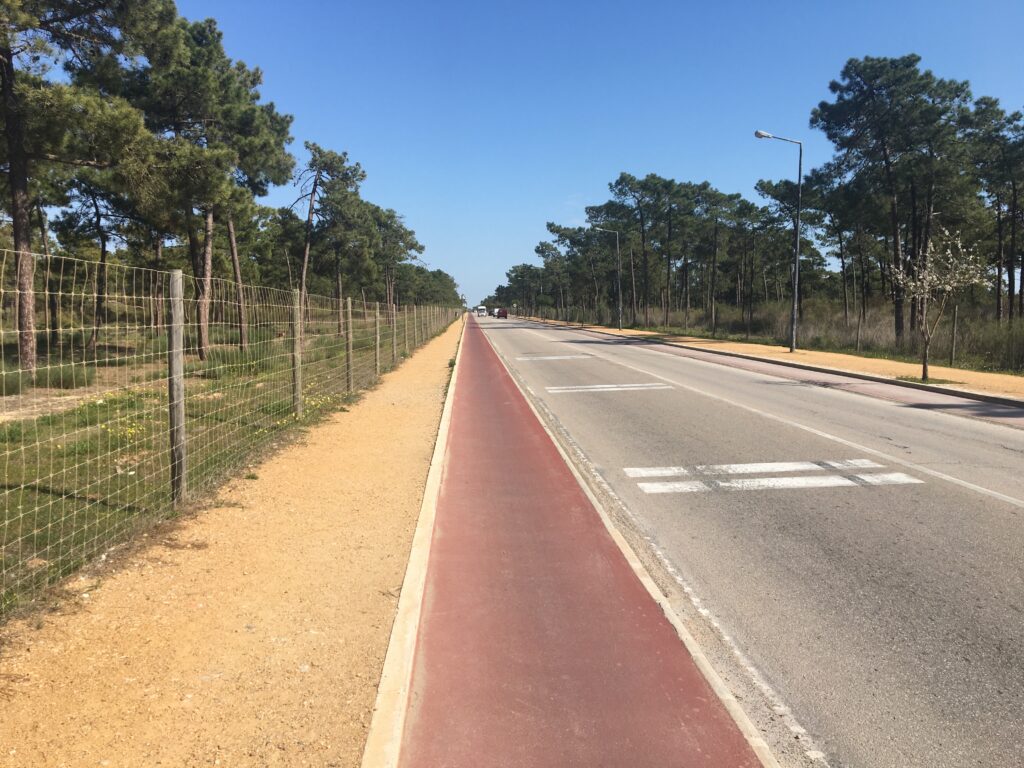 Tracks in Portugal near Monte Gordo are excellent for a pre-race training camp. I ran my faster stretches on the red track in the photo above. The running tracks and the great climate there attract top athletes from all over Europe.

I arrived at the venue two days before the marathon. The sight that greeted me there was impressive – it was brimming with top runners who were getting ready to run the race of their lives to get the chance to compete in the Olympics. It became clear that there were many countries striving to qualify: Brazil, Sweden, Ireland, Israel, Spain.

I was placed in the same room with a Swedish marathoner Mustafa Mohamed. I had met him in Portugal in the year 2016, right before the marathon in Hamburg. It was his advice that helped me surpass my personal record, a time which gained me entrance to the Rio Olympics. I had also personally met with a British runner Jonathan Mellor, a New Zealander Malcolm Hicks, an Irishman Kevin Seaward, a Dane Thijs Matthias Nijhuis and a Swedish man Mikael Ekvall. All of them men who have shown great results and who wished to take another step in their running career.

The day before the race there was a technical meeting with a couple hundred elite runners and their personnel. Everything was running smoothly, however what raised concern was how the Spanish handled technical problems. The information shared at the meeting was not unequivocal. This also reflected later in the competition. 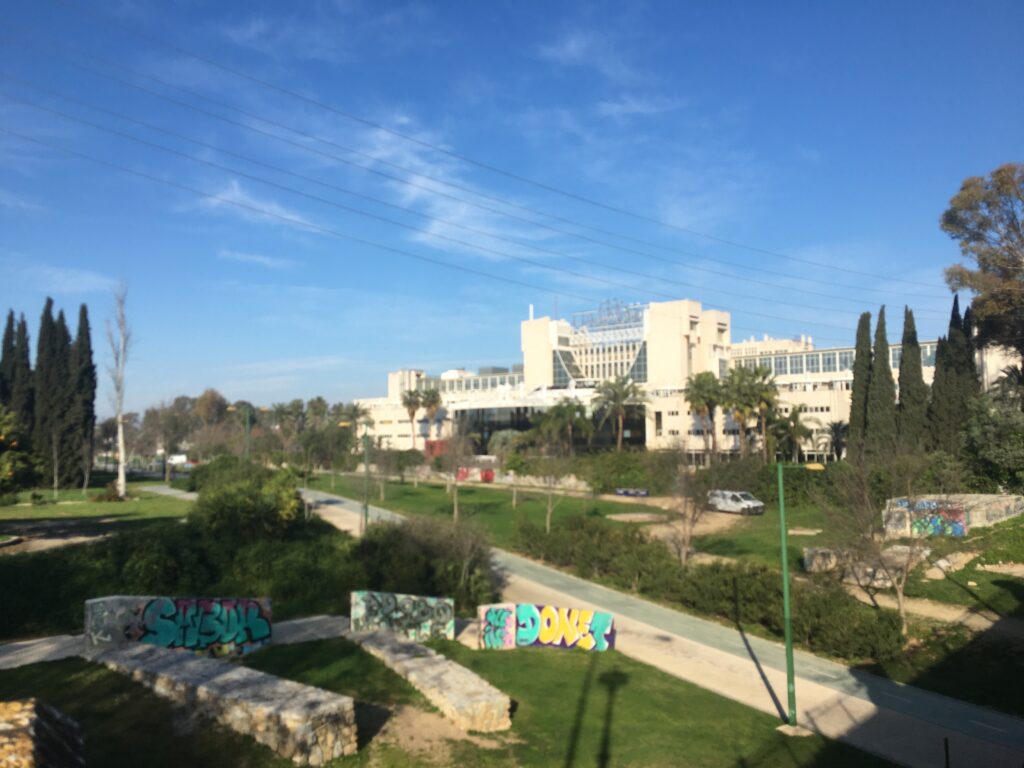 The hotel where the contestants were accommodated. The winding pedestrian road next to the hotel was a favourite among the top athletes. Contestants were placed in twin rooms based on the organizer’s whim. For athletes it was a lottery – whether you will get a good roommate or not.

The starting pistol went off and the adventure of a lifetime started. For five months my life had revolved around this one event. And now it was here… the possibility to run fast and long. During the first few kilometres I tried to pinpoint the men who I would need to keep pace with and who will become the pacemakers. When he emerged from the rear, a great crowd gathered around him. There seemed to be around thirty people. It is engraved on my memory how for a moment I looked at the heels of the men in the back of the group and thought that we ran in the same pace as if we were soldiers at a parade. It was a delight to run at a confident and hopeful pace in the cool Seville morning. The asphalt was pleasantly smooth and the turns not too demanding. 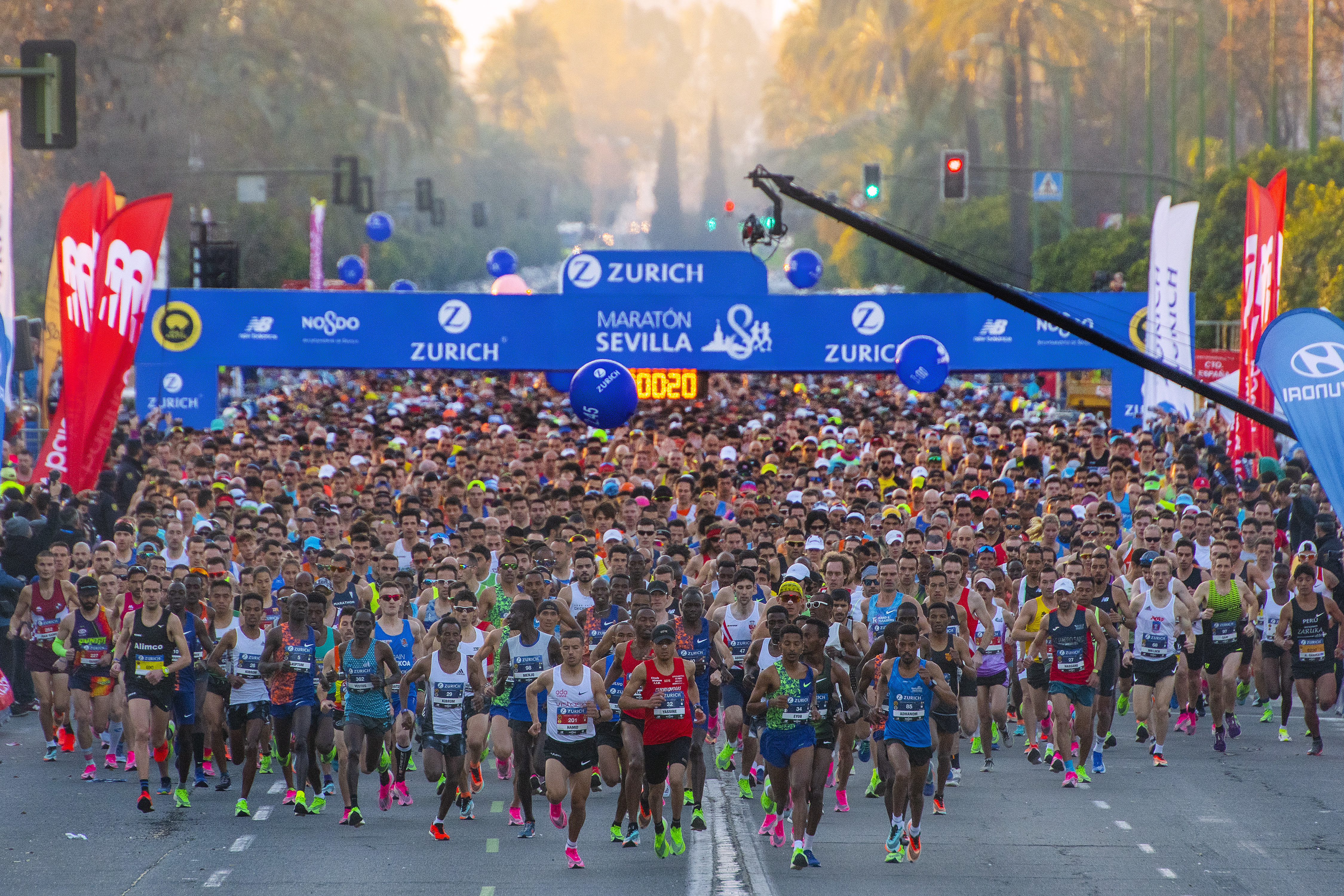 The race started at 8.30 in the morning. We had more than 13 000 runners at the line. Photo by Cano Fotosports

Every five kilometres I took split times with my watch. I could see that the pace was sufficient to fill the qualifying standards, but I tried to avoid thinking about the outcome, as there was a way to go before I would get there. Anything could happen on the track, even in the best company, climate and physical shape. I focused on relaxing my breathing and steps. If everything else seemed to go smoothly, then water stations were a hassle. The organizers had placed the water stations of elite runners too near each other and the bottles too close together. In almost all the stops there were and falling and lost bottles as well as fluctuations in speed. Luckily my Mickey Mouse bottle was on the same table as a Dane’s. You could easily identify the Danish flag on the bottle from afar. Twice I had to ask my fellow competitors to return my bottle because they had accidentally swiped it. Incidentally, Kevin from Ireland had found my bottle amusing the day before. He was one of the bottle snatchers during the competition. I allowed him to have a sip, but the lion’s share of it was mine. Halfway through the race the speed increased noticeably, I assume the pacesetter was getting tired. 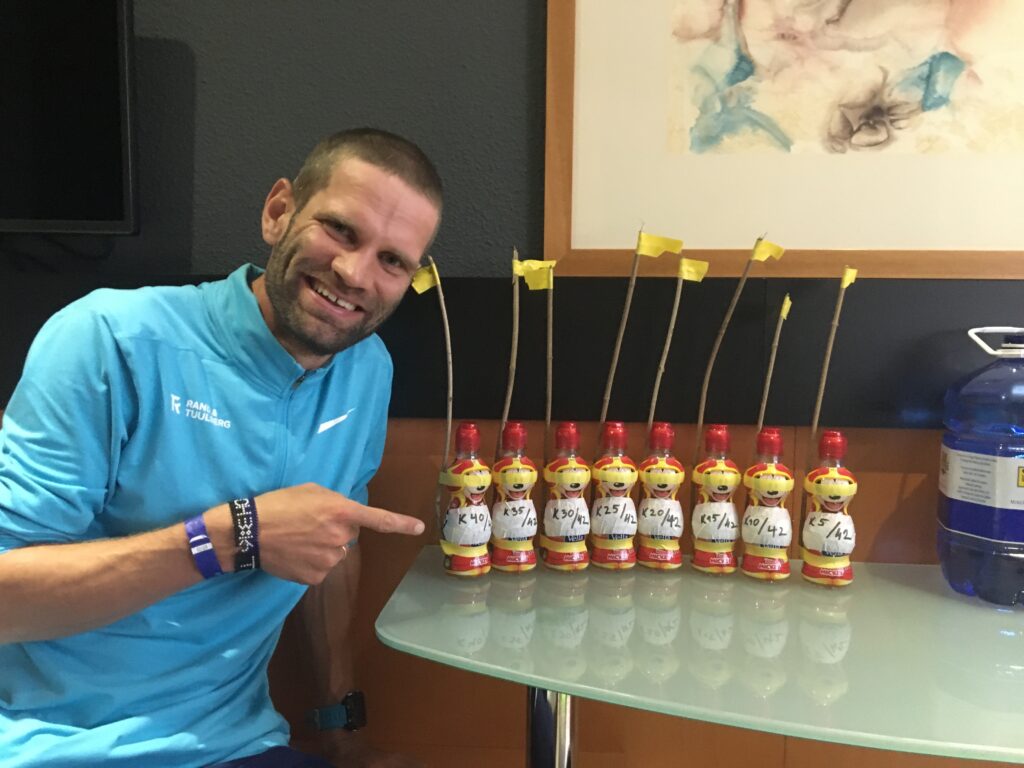 Every elite runner will mix their own personal drinks. My assistant in Seville, Nick Schuetze, bought me Mickey Mouse bottles from a local store. Imagination is invaluable in distinguishing your bottles from the rest of the contestants’.

Our 10km split time (20km – 30km) was 30.19. On a bad day this could have been a time for a 10km run. The rest of the race was uncharted territory as I had accomplished something I had never done before – ran fast and long. Seven kilometres before the finish I was confident that unless an accident occurs, the Olympic standards will be met. Nevertheless, my body was tired, and it was getting increasingly difficult to run; at one strenuous moment, a slow and famous tune started echoing in my head – ‘Everybody Hurts’. The only thing I could think about was not letting the group get ahead, and that everyone must be hurting. 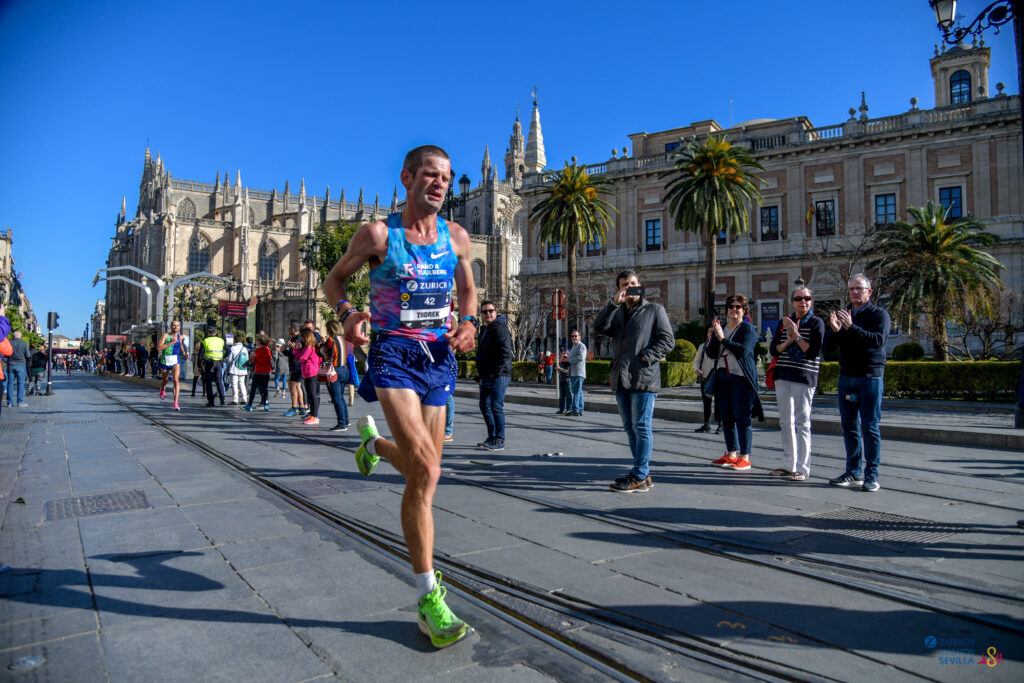 The photo was taken at the 40km, at the time when the song ‘Everybody Hurts’ was ringing in my head. In the background there is the Seville cathedral, largest Gothic church in Europe. Photo by Cano Fotosports

Hitting the last kilometre, I got ready for the finale, and 400m before the finish line I speed up, running past seven people, including my friends, and my recorded time was 2:10:02. Directly after me came Mustafa with a new Swedish record. Later he told the Swedish media that seeing my final dash gave him the determination to pull through and surpass the previous national record by a few seconds. It was impressive in itself that we were able to run the second half of the distance 50 seconds faster than the first (1:05:26 / 1:04:36). 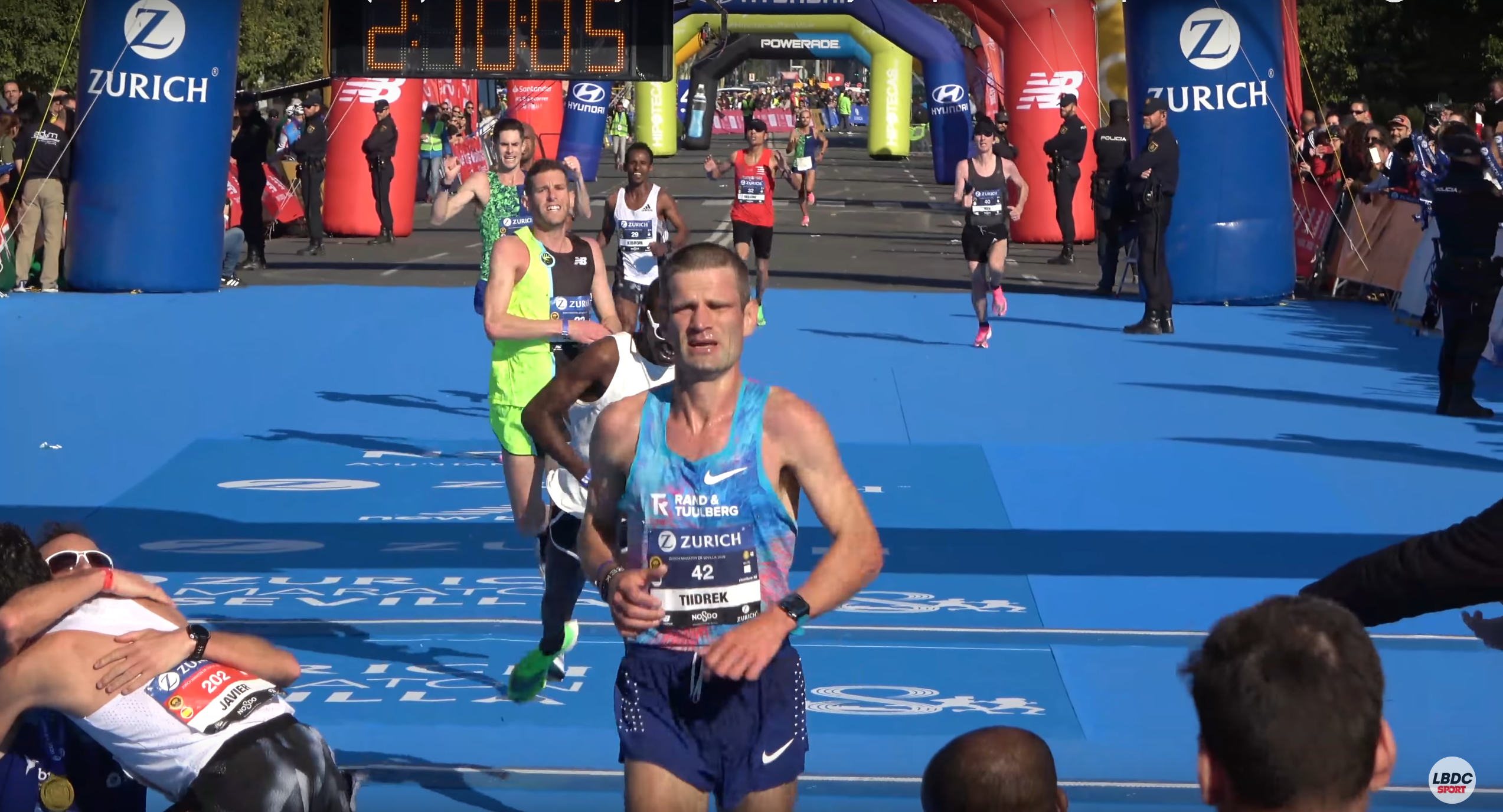 Some screenshots from different national newspapers about the runners who qualified for the Tokyo 2020. 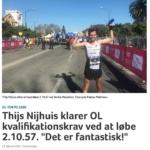 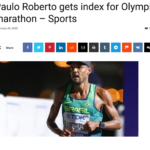 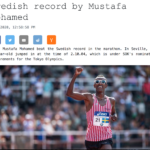 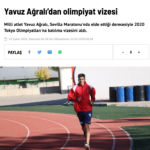 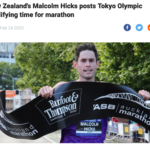 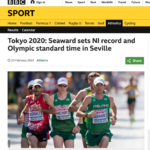 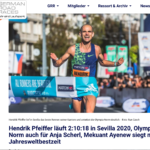 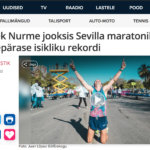 The conditions in Seville were ideal to meet the Olympic standards, which is confirmed by the excellent times of the other runners and their impressive personal records. All my friends ran the best they had ever run, five of them even meeting the Olympic standards. A little before the 40km split time, I uttered to the New Zealander beside me: “Glory be to God!”. And this is it! What all could have happened on the track before the finish line? The likelihood that so many of us would succeed is so utterly slim. Sicknesses, problems with travel, heavy training routines, life situations, work, school, family, media, psyche, spirit, physical health – things we all needed to face. Despite all the challenges in life, the dream came true – this is a miracle!